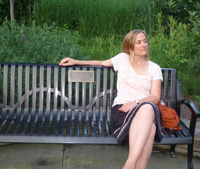 In April 2009 I was visiting Oberlin College in Ohio, where I got my degree back in 1984. Since its founding in the 1830s it has been a progressive place – one of the first colleges in the USA to admit both African Americans and women. I was lucky enough to see the novelist and Nobel Laureate Toni Morrison there, dedicating a Bench by the Road to mark Oberlin as a significant place in African American history. Oberlin was an important stop on the Underground Railroad – a 19th-century network of people helping runaway slaves escape from the South to the relative safety of the North.

A couple of days later I went to a Quaker meeting. While sitting in silence, I began thinking about how Quakers were opposed to slavery and many had been abolitionists and worked on the Underground Railroad. Oberlin and Quakers came together in my mind then, a spark ignited, and I knew I would write about it.

Other elements emerged from my research to thicken the story – quilts, bonnets, farms, woods and corn – but the core of The Last Runaway centers on searching for freedom.