For as long as there were slaves in the United States, there were runaways trying to escape, either to Northern states or to Canada. From the early 1800s a loose network grew of people sympathetic to runaways. Free African Americans and white abolitionists began helping fugitive slaves flee north, hiding and feeding and transporting them. This network became known as the Underground Railroad.

A quilt is a bed covering made of two layers of fabric with a layer of wool, cotton or other soft material sandwiched in between, all held together by decorative lines of stitching. Most 19th-century women in Britain and the USA knew how to make quilts. 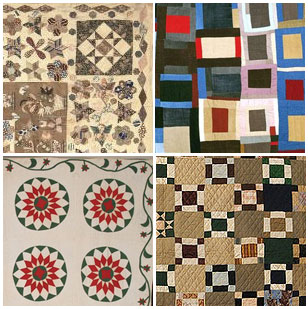 Made for practical reasons, quilts nonetheless were a rare opportunity for women to be creative. Here is a selection of the various kinds of quilts I write about in The Last Runaway. The links take you to more examples of that type of quilt on my Pinterest board.

English Quilts: Usually patchwork, often of triangles, squares, or hexagons; made using paper templates the fabric was tacked to, then the pieces sewn together. Sometimes the maker didn’t remove the paper, and all sorts of things have been found: shopping lists, love letters...

American Quilts: Often made of block pieces – a simplified patchwork – or cut-out shapes appliquéd onto larger pieces of cloth.

Red and White Quilts: These were of German/Pennysylvanian origin, and became very popular in Ohio. Usually red and white, and sometimes green; appliquéd floral patterns.

Quakers – officially members of the Religious Society of Friends - are a small Protestant sect founded in England in 1647. Quakers believe in a direct experience of God through sitting in “silent expectation” at Meetings for Worship. There is no leadership through clergy, and decisions are reached through consensus.

Ohio is a curious state. It has never felt like part of the East Coast, with roots extending back to Great Britain; but it does not have a Western, or even a Midwestern, mindset either. It is a swing state in elections; every Presidential candidate must win it to win the election. Seven US Presidents have come from Ohio. Clearly it taps into the American psyche; it is perhaps more representative of the USA as a whole than any other state.

Oberlin was founded in 1833 by Presbyterian ministers as a religious community. The town and college at first followed strict principles: no alcohol, tobacco or gambling, plain clothes, sober living. The college was the first in the country to admit African American and women students, and has always been associated with progressive causes.

Until the 20th century women always wore something on their heads. In 19th-century America and England, they would usually have worn bonnets, and occasionally hats.